I thought I’d make a quick mention for now about the period when Scorgies became Yuk-Yuks, then Hiccups. It was a time when stand-up comedy was red-hot on a national basis…and for then, Scorgies bands were on the wane. I had mixed feelings about the switch-over from a cool club (after The Ramones were the last major band to play there) to a painted-black and chilly downstairs place for a few years. I used to supply music cassette tapes for the d-j, and interviewed comedians from Saturday Night Live that used to swing by there (like Rich Hall, David Spade, and Colin Quinn).  Many local comedians became nationally known like Brother Wease, Joel Lindley, Eric Nusbaum, Dan Liberto, Ralph Tetta, Mike D’Ambra, Spilt Milk (with Eric Haessler, Mark Cooper, and Duncan Kennedy). Some of us stand-up comics (local guys) were also given the chance to write ideas for the then-popular Joan Rivers Show (prior to becoming The Arsenio Hall Show). Some of the comedians performed later when the place was Token Joe’s upstairs. I’m sure that I can write a lot more about those times…but that’ll fill yet another web site. Of course, stand-up comedy also waned and a newer Scorgies (albeit temporary) did come back again! – Del Rivers 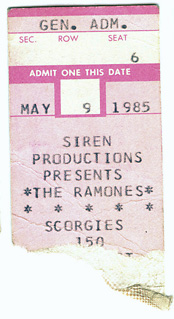 The place was oversold & packed tight, you couldnt squeeze another drop of sweat into the room. One of those shows that, if there’d been a fire everyone would have been a goner. Hot as hell inside, and once they went on the whole place just exploded into moshing & surfing under massive blasts of Red White & Blue light.

It was the Too Tough to Die Tour, which was considered a comeback album of theirs in the 80s. They had just played town a few months earlier, opening for Billy Idol at the War Memorial. Richie was drumming then, and thats a part of their career that gets overlooked. For my money he was the closest thing to Tommy.

They played like a fury and the body to body compression was so severe that it kept jamming my Walkman recorder. Only 3 songs survived on tape & I’m presenting 2 of them here: Blitzkrieg Bop and Rock & Roll Radio

If you want to get a sense of how crowded it was, compare the audience here with the other clips. Unbelievable.

If anyone has pix from this show, email them to me & I’ll post ’em. info@click2vu.com