It’s been almost thirty years since the Rain Parade played Scorgies. That was an incredible night, of course. Absolute Grey was the opener, and Mark Theobald was behind the mixing board. The band at the gig featured Matt Piucci, Steven Roback, John Thoman, Will Glenn & Eddie Kalwa. Years later, Lynne and I seized the opportunity to catch up with Matt, Steven & John at their reunion gig in Atlanta at the Earl on January 19th, 2103.  They were reuniting that night as part of a fund raiser for Bobby Sutliff (of Windbreakers fame) who had been in a horrible car accident in June of 2012.

END_OF_DOCUMENT_TOKEN_TO_BE_REPLACED

Ladies and Gentlemen, The Projectiles

The cool thing about sifting through old newspapers is reading about shows you’ve barely remember; Embarrassingly enough, though, it appears I sang backup on “Gloria” (with Del Rivers, no less) for the Projectiles. I think I need more Ginkgo Bilbao!

Anyway, here’s an article from Pat Thomas’ Notebook written by Brian Goodman about the time the Projectiles “stepped up” to the plate to sub for the Lyres.: 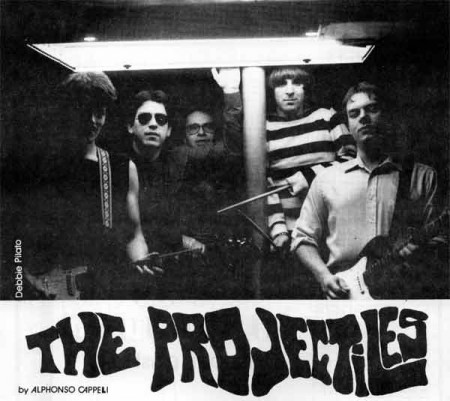 On November 16th, 1 got into my ’65 Dodge Dart and headed off to Scorgies to see The Lyres. When I arrived I was informed that The Lyres hadn’t shown up yet. So I paid the cover and went in. What happened to me after that was that 1 discovered one of the best Rochester 60’s bands since The Cavemen. So I quickly made my way to the front of the stage so I could see what their bass drum said. After pushing a big drunk guy out of my way, I could see that it said The PROJECTILES. It was written in lettering just like an old poster for The CHOCOLATE WATCHBAND  playing at The FILMORE (Wes Wilson, Rick Griffin-artists) The sounds 1 heard were devastating ***** Such as Question of Temp., I Wanna Come Back From The World of LS.D. and Bad Little Woman. 1 stood in amazment as I watched them hammer out about 30 songs in one set. As soon as they left the stage, I quickly started yellin’ MORE MORE. ***** But local legend Stan “The Man” got on stage and made the announcement The Lyres had cancelled. The first thing that came to my mind was that the opening band would be back to play more. Just then Stan said that they would be back and there was gonna be a 10 minute open bar. Cool daddy-o **** After about a 20 min. break, The PROJECTILES took the stage. They started the 2nd set with the classic GLORIA. On lead vocals was Mick (Hidden Charms-Boss Beat) Del Rivers and Stan on backing vocal. After the mayhem, it was back to business. They started playin’ classic nuggets like Public Execution, Mouse and the Traps, the list is endless. A good time was had by all. After the show, I quickly ran after the band to find out their names and where they’d
be playin’ next. They told me that nothing was going on until Jan. 11th and that COUSIN AL and THE NEW GENERATION were gonna be the opening band.

So see you there, So long for now. Alphonso Cappelli

Alphonso Cappelli is a freelance writer who has never written a thing in his life before this. He has also never typed before this. *********