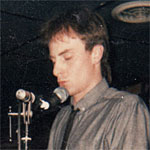 Paul Szp of Paper Faces at Scorgies. Photos by Paul Dodd. (Click on photos for enlargements.)

One of my favorite bands from the Scorgies days was Paper Faces. They were technically from Kenmore, outside of Buffalo, but they seemed like they were from another world or Europe at least. The two main guys were brothers, Paul and Brian Szpakowski or Szp for short. Paul played keyboard and Brian guitar but the whole band seemed to always be switching instruments. Dave McCreery played a tight rhythmic guitar and George played a loose limbed bass or guitar. Bill Moore played drums like a drum machine, not a big muscular beat but a detached, mechano style that seemed very cool. There is a new band out there called Paper Faces but don’t be fooled. These guys own that name. We met Paper Faces at the Hi-Techs’ first gig in Buffalo. Debra Lary booked the show. We had met Debra when she brought The Vores to a show in WCMF’s back room. The Dictators played the back room and Robert Fripp did his Fripatronics thing there too. Both were outstanding shows. I don’t know why they don’t do that sort thing anymore. 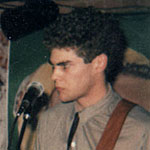 Paul Szp and Dave McCreery of Paper Faces at Scorgies

The place we played in Buffalo was called the Masthead and it was tiny. It was us, Paper Faces and a handful of patrons. Late in their set George started making up lyrics about the spots on the floor of the bar. He had us all looking down as he described this overlooked universe. We were sold on these guys and booked a gig for them at Scorgie’s with the Hi-Techs. We must have played ten times with them at Scorgies (judging from the Posters section) and many more in Buffalo at the Continental, McVans and the Schuper House. Buffalo seemed so much tougher than Rochester. The bars were open til four so the night was long. Hookers roamed the streets outside the Continental and people said Bud, who managed the place, ran around in a Nazi uniform. All I know is, we had to ask him to shovel off the stage before we set up our equipment because the German Shepards he kept in there shit on it. They had a dj and a dance floor upstairs so the bands had to compete with that crap. It was all worth it. We went back to to Paper Faces’ rehearsal place one night and partied til the sun came up. We met Mark Freeland and Tony Biloni through the Faces and Toni took us to a party with Tony Conrad from the pre VU days. 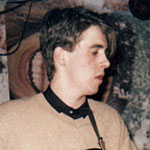 Paper Faces released a killer 45 with a beautiful sleeve of their popular song, “Riding A Bomb”. “In the distance I see people praying. Give us what we need, carbonated liquids. We all need each other’s company.” and the refrain, “I’ll be hungry in the morning. I’ll be hungry in the morning.” David Kane produced it. Margaret Explosion did a gig with his “Them Jazzbeards” a few years back. I liked the b-side, “Deep Sleep”. We played it tonight. I wish I had one of those Crosley turntables so I could rip singles like Kevin Patrick does. Paper Faces have been in a deep sleep long enough. I wish they would come back.