From the Jan 18th 2004 edition of the Rochester Democrat and Chronicle’s Living Section; official reprint available at http://www.democratandchronicle.com/ 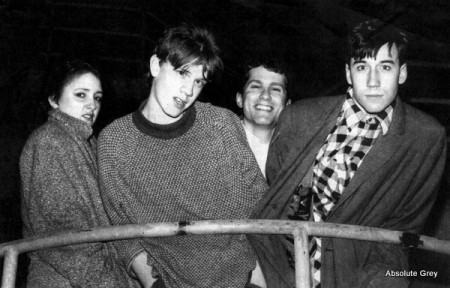 If continents can drift 20 centimeters farther from each other over 20 years, imagine how a volatile rock band can scatter in that time. The drummer to San Francisco. The bassist to Maine. The guitarist to Seattle. The lead singer to Ithaca.

Twenty years ago, those four pieces were Absolute Grey, one of the best, most happening bands that Rochester has had to offer to the music world.

It was beyond music, even.

“It was multimedia in its earliest, roughest form. That’s how pretentious we were back then,” recalls bassist Mitch Rasor of a show at the Pyramid Arts Center. 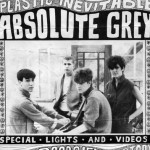 “We had a big crowd, and on all of the walls and the ceiling we were showing these films we had made, and our friends who were filmmakers had made, to go along with the music. It was complete immersion, it was everywhere, and I was standing in the middle of it all, almost forgetting I was playing.”

Twenty years later, folks who weren’t at Scorgie’s – the center of the local rock universe, but now a shut-down, silent club on Andrews Street – probably don’t know what the fuss was all about. “There was a buzz going on about this particular band,” says Dave Anderson. “There seemed to be something exciting about them….”

Now the album that Anderson recorded hi his attic studio, the Absolute Grey debut, Greenhouse, has just been re-issued. It’s accompanied by a live recording of the band playing at Scorgie’s, speaking from an era when groups such as R.E.M. could emerge from the world of independent, underground music to become stars, their noncommercial integrity still intact.

Greenhouse is Exhibit No. 1 that Absolute Grey had the goods. And the fact that the band still has fans to 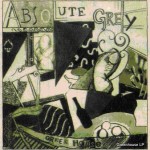 this day – such as R.E.M. guitarist Peter Buck, who’s quoted on a sticker on the new CD jewel box claiming    “I still have the original LPs” – is Exhibit No. 2 that Absolute Grey is more than a passing moment.

They loved ’em in Germany, where a two-CD retrospective was released 10 years ago. They adored ’em in England, where a review of Greenhouse that is to appear in today’s London Sunday Times reads, “Squint a little and Greenhouse is stupendous….” The Scorgie’s tracks secure “Greenhouse its own little space on the lost classics shelf.”

This of a band that released only four albums in its brief lifetime, the last two on a label in Greece. We’re talking Greece the country, not Greece the Rochester suburb.

Rasor and Matt Kitchen, the guitarist, were students at Pittsford Sutherland High School. They went off to college. End of band, it seems. 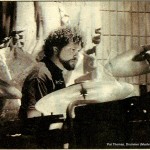 “Beth and I tried to convince them that it was obvious we had something going on,” says Pat Thomas, the drummer; Beth was Beth Brown, the band’s incandescent lead singer, a torch shining through her band mates’ darkness. “And one more year might have been all we needed to bring it up to the next level.”

As it turned out, it’s been 20 years to bring it up to the next level. There are 10 more songs, worked on intermittently over the years, now almost ready for a new Absolute Grey release. That appears to be inevitable; the energetic Thomas will make it happen.

Perhaps the band’s premature end was also inevitable. After graduating from Sutherland, Brown was working as a clerk at Record Archive when Greenhouse was released. She was 23 and Thomas, who had moved here from Corning, was 24. But Kitchen was only 16, and Rasor 15. Yet they were already perfect rock stars. “I was too radical,” Rasor says of being kicked out of art class. As sophomores, he and Kitchen took charge of the school yearbook and used Kafka’s Metamorphosis, the story of a man who awakens to find he’s been turned into a cockroach, as the theme. “It was all gray, with pictures of, like, the chess club over decomposing leaves,” Rasor says. “The total opposite of what a yearbook is supposed to be. The seniors were furious.”

The members of Absolute Grey saved their fury for the band: “We fought like cats and dogs.” Brown and Rasor both use that phrase.

“We were so pretentious, we’d fight over poetry,” Rasor says. “We took ourselves so seriously. We were so spoiled. It’s like I wrote in the liner notes hi the CD that was released in Germany: ‘Somehow we managed to 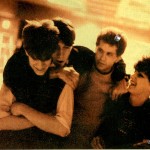 overcome all the advantages we were handed in life to start this great band.'”

Anderson agrees with Rasor on that point.

“The guitarist and bass player were from Pittsford, and I think Beth was, too,” he says. “They had an air of arrogance about them, I must say. Matt had a very condescending tone, especially for a young kid, I thought. He was very serious; he was very intellectual about everything.

“He was the main songwriter. They were very moody, atmospheric tunes. It was kind of a downer trip, overall. But in a good way. The name says it all. Absolute Grey.”

They could see nothing but gray. Anderson recalls being in the attic studio during Greenhouse. Brown was in the basement, recording some vocals; something about the acoustics, or her needing to be alone. And he could hear her crying as she was singing her part.

“You know how they say the light in the south of France is best for painting?” Rasor says of the fuel of collaboration. “Well, being in a band… it’s the best. Being able to take ideas and turn them into songs the next day is a great, especiall in high school, when you’re filled with all of this teen angst.” Absolute Grey plunged into the Scorgie’s scene, dominated by local bands such as Personal Effects. Paul Dodd, that band’s drummer, ran Earring Records, a small label that had already released music by the Wilderness Family, the Essentials and the first Colorblind James Experience album. He agreed to release Greenhouse as well. “I remember Pat,” Dodd recalls. “He was a real hustler.”

Hustler, as in aggressive. Among the many talents of Absolute Grey was professional focus. “There was no money attached, no contract. It was just a name. A co-op. A commune. A collective,” recalls Peggi Dodd of Earring’s relaxed business ethos; she was Peggi Fournier then, a keyboardist in Personal Effects. And she was a teacher at Sutherland. Rasor and Brown had been among her Spanish students. They even recruited her to play keyboards on two Greenhouse songs. “I’d come see the band,” she says, recalling the music as “somewhat dark.”

Conceived in an attic, Greenhouse was born in the basement of Scorgie’s in the winter of ’84. “There was a huge blizzard, and I was so worried that people wouldn’t come because the weather was so’horrible,” Brown says of the record-release show. “But the place was packed, everybody was partying, and I was so gratified.”

Less than a year later, Rasor was a student at Oberlin College in northeastern Ohio when he heard that the college radio station – which didn’t even know that the guitarist from Absolute Grey was on campus – had selected Greenhouse as its indie album of the year, over the likes of R.E.M.’s Murmur.

But that was really the beginning of the end. 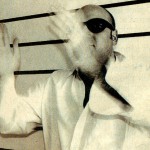 “I think I can speak for Matt,” Rasor says. “We both knew we wanted more of an academic career, an arts career. Absolute Grey was about to go somewhere, but it was not quite the train we wanted to be on for all that time. I’m a little more comfortable in a library than onstage.”

Absolute Grey proved to be a springboard for Rasor and Thomas in music. Rasor has found a way to combine his interests in architecture, landscaping, graphic design, writing and music – he’s working on his 23rd album, some of which are solo efforts – with a company called MRLD, just north of Portland, Maine.

Thomas lived in Denmark for a year, then used his Absolute Grey connections for a move to California, where many of the survivors of the ’80s psychedelic-rock revival lived. He now runs a San Francisco label, DBK Works, that re-issues classic records on vinyl. And new works as well, including his own solo records and, obviously, Greenhouse.

Kitchen spiraled off into a different orbit, setting down his guitar in favor of a fiddle and a civil-service job, a wife and a daughter in Seattle. The other three members of the band describe him as ambivalent about Absolute Grey,

Brown? The band’s star, with her blend of folk-rock and wailing-punk vocals, has taken the oddest – most frustrating, even – road of them all. “I’m disappointed and angry,” Thomas says, “that she never went on to do anything without us.”

Brown moved to Boston, enrolled in art school, drifted to Ithaca and started a sign-painting business, then moved to the Berk-shires and opened an art gallery. By then, she had a daughter – Indiana – with a German immigrant named Knut Schmitt.

Now she’s back in Ithaca. She and Schmitt went their separate ways years ago. Yet in a strange twist, she’s not only caring for their daughter but also the 54-year-old Schmitt, who now is battling early-onset Parkinson’s disease. 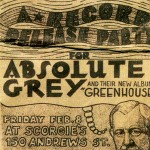 Interestingly, the 20-year-old Greenhouse has been an instrument of healing for Thomas, Rasor and Brown. It’s as though they’re seeing Absolute Grey with the clarity of the light of the south of France.

“Right now, we’re enjoying a period of love,” Thomas says of his relationship with Rasor. “But we’ve certainly had a love-hate relationship over the years. He and I have kissed and made up in a really big way.”

“And I think putting this out has made Beth realize, it’s now or never for her solo career. I sent her an e-mail recently and told her, ‘You’re probably 10 times more talented than me, but you never did anything with it.’

Indeed, recently Brown has been writing songs. She will be on the new Absolute Grey release. But her focus is on recording her own music, probably with Anderson’s Saxon Recording, and will return to Rochester this year to find some like-minded musicians to help.

It took 20 years for Brown to take the next step after Absolute Grey. “I didn’t want to do music for a while,” she says; the guitar was packed away. “You know how 2-year-olds are. They mess with stuff.”

Now Indiana is 8. The guitar is out again. Brown, who always collaborated, has discovered she can write songs on her own. “This is going to be a powerful record,” she says. “I can’t wait to do it.”

“You really need to leave that guitar out on the stand. So you can just pick it up. Anytime.”