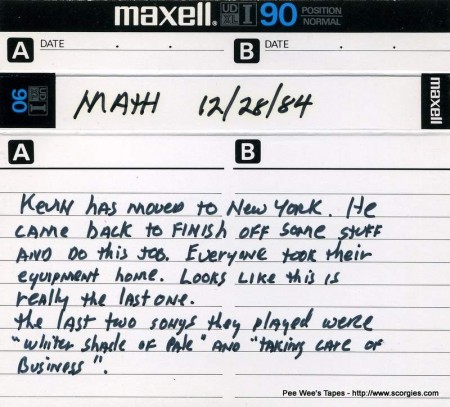 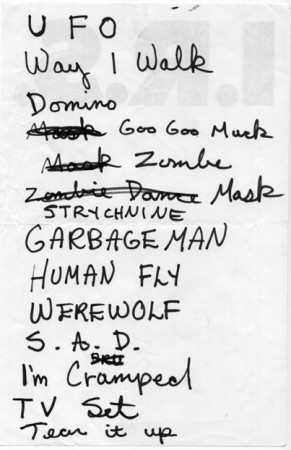 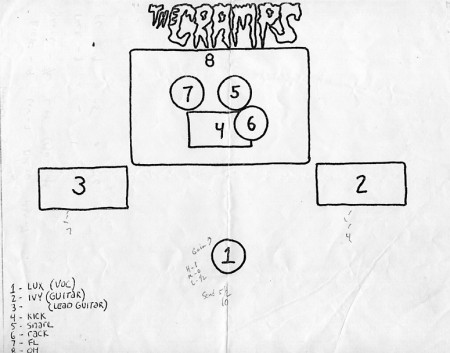 The Cramps played Scorgies twice. In the summer of 1980 after their first album Songs the Lord Taught Us came out, and a year or so later for their 2nd album, Psychedelic Jungle.

Several weeks before the 1st show, their fuzz-lead guitarist Bryan Gregory had backed a truck up, loaded all the equipment into it, and disappeared into the night to join a cult in San Francisco. I think it was a long time before they saw him again.

They replaced their equipment and recruited a woman guitarist for the tour named Julian Griensnatch. The Scorgies show was her second gig in the band. The set list is reproduced here, along with the stage plot for their equipment. You’ll notice that the name of the lead guitarist is left blank, she probably wasnt hired yet when they drew it out.

New Math opened the show. Once the Cramps hit the stage, they lived up to all the rumors that had preceded them. Wild & furious, they played songs from the album as well as their Gravest Hits EP & indie singles.

At one point I yelled out a request, “Surfin Bird…!!”

“Surfin Bird??!” Lux immediately shouted back, “I’ll show you a Surfin Bird!!” and with that he pulled out his dick & swung it around for a second before tucking it back into his stretch pants. Pretty much shut me up from requesting anything else that nite.

Don Scorgie had just recently hung a new suspended ceiling in the whole club. Onstage however, the new ceiling was within striking distance of anyone raising their hands above their head. Lux punched straight up into the air once, and his fist went straight thru the ceiling, breaking a tile. That was all the invitation Lux needed & he began slowly pulling sections of it down by its thin metal frame while he sang.

Don stood at the side of the stage turning red with anger. He began punching the brick back wall of the club with his bare hands. The Cramps ended their show & Don bounded up onto the stage with fists clenched, daring anyone to applaud. Then he started punching the Cramps tom tom drums, trying to put his fists thru them. There was no encore.

Shortly after, Don removed the section of the suspended ceiling over the stage, which made it easier to hide the front stage lights.

That nite, Kevin & Gary from New Math invited the Cramps back to the house they had apts in on Merriman St. True to the Cramps legend, a bat flew into the apt while they were there. Lux caught it & humanely released it out the kitchen window. True story.

Eric Nelson got in touch after reading this, & emailed me the following great pic from the show. He reminded me that Lux had smashed 2 beer bottles together, shattering them & cutting himself on the chest. I remembered it immediately, and even recalled asking Ivy after the show if Lux was alright, with her replying “oh, he does that stuff all the time…” Thanks Eric. 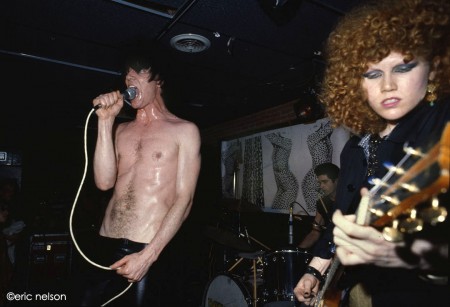 The second show, a year later in 1981, was another crazy event. I think the way it happened was Danny had originally booked the Cramps into some bar restaurant out in Henrietta that was starting to have bands. Something happened at the last minute and that place cancelled. Danny moved the show to Scorgies (I think he was also booking Scorgies at the time). Don wasnt very happy about The Cramps coming back to his club. The Cliches opened that show.

Having met them the year earlier, Kevin & I went down to Scorgies in the afternoon to see them soundcheck. They had arrived & their equipment was set up but the band was nowhere to be found. We stood in front of the club trying to decide what to do when the funniest site emerged. The Cramps had been up the hill & over on St Paul, so they were walking back to the club. During the Psychedelic Jungle tour, Lux wore his jet black hair combed & sprayed straight up like a voodoo god from a 1930s horror movie. It stood up over a foot above his scalp. The first thing we saw, looking up the hill from Scorgies, was Lux’s hair bopping up & down as they crossed St Paul. Everything else was out of view. We stared at it for a few seconds as the rest of Lux & the band appeared.

Their new guitarist was Kid Congo Powers, and he was sick. Not only in the Cramps sicko-rockabilly way, but intestinally as well. The stage was covered with fake cobwebs, burning votive candles, and deep green & blue light. There were skulls sprinkled around the drum kit. The brightest thing on the stage, tho, was Kid Congos bottle of Pepto-Bismal which was glowing bright pink as it sat on his amp. He was swigging it all nite.

The show was great, with that heavy druggy “Sit right down and make yourself uncomfortable” swamp vibe. Lux’s hair standing straight up & Kids hair standing straight out. Both effects courtesy of the case of industrial beauty parlor spray I saw in the dressing room. Big cans, like spray paint, totally toxic looking with a generic gray label. Ivy said they found them in a beauty supply wholesale place in the south.

They opened with Don’t Eat Stuff off the Sidewalk, and played most of Psychedelic Jungle, including The Natives are Restless, which they never play anymore. They did Drug Train, & a lot of earlier stuff.

That second show was also not without incident. Someone stole the bands new digital guitar tuner, and then their next day transportation plans to Ohio (the next gig) evaporated, leaving the band stranded in Rochester. Kevin let them use his credit card to rent a car and I took them shopping at a 1950s interior furnishings store I knew down by Bulls Head. That day cemented what became a long term friendship that resulted in Kevin signing The Cramps to his Medicine Label at Warner Records, when I worked there with him in the early 90s. We made the album Flamejob with them.

If anyone has great pix from this show, email one to me at info@click2vu.com & I’ll post it here.