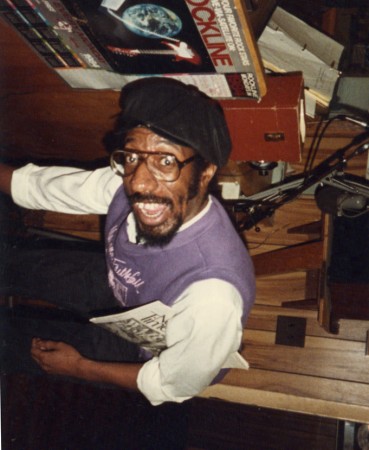 Roger McCall was an original supporter of the growing alternative rock scene back in the early days of Scorgies.

As the overnite DJ on WCMF, he had a special relationship with everyone working trick shifts at Kodak, or the other factories, or the 24hr Wegmans, etc.  In the early days after college, as I was job hunting, I did a lot of short term factory work, often on overnite shifts. No matter where I was working, his show was always playing in sync out of countless small radios, echoing all over the warehouse floor.

He started a show called Homegrown where he played local bands tapes or indie singles, had them come in for live interviews, and always talked up their shows.  This led to a series of Homegrown compilation albums where many of the local bands had their first (and sometimes only) recordings released.

He & Kevin Patrick started up a late nite show on ‘CMF called “Import/Export” where they played a lot of the UK singles Kevin was collecting as well as good stuff coming out here that the station normally wouldnt touch. National recording acts that passed thru to play Scorgies often stopped by ‘CMF after their show to talk with Roger.

He wasn’t at a lot of Scorgies shows, because he was on the air at that time, but I can’t think of another local media personality that was as supportive.  He was never malicious, even in private he would never say anything negative about any local band.  I remember Paul & Peggi & I doing an impromptu little collaborative recording & performance project called the Three Stools. We recorded 3 or 4 songs in my bedroom. I knew Rogers tastes in music enough to know he wouldnt like this stuff at all.  I also knew him well enough to think that he would tell me that he didnt like it. There was a lot he could pick apart about it, but when I asked him what he thought all he would say was “I love the concept”. A true gentleman.

I moved to NYC & hadnt seen Roger for well over 10 yrs, when I ran into him unexpectedly at 6:30 AM one morning during a visit home.  I was leaving the East Ave Wegmans with coffee, as he was coming in, having just gotten off the air.  It was literally like we hadnt talked in a week, it was so great to see him.

Roger was murdered near Bulls-head a few years ago. Killed on the street at nite, in a crime that was never solved. Maybe others can shed some light, but to me it seems like there wasnt much effort to solve it.  I never heard much about WCMF leading the charge or putting pressure on the city to go the extra mile in finding the killer. He definitely deserved more.

One thing I know for sure, there isnt a band in Rochester, then or now, whose path isn’t somehow easier because of Roger McCall and his support for local music.