September 29, 2008 in Uncategorized, Your Stories by Peggi | 3 comments

Comedy and the drinking age swooped in to finish off the Scorgies music scene in 1985. It came back after a 5 year hiatus. But things were never quite the same as the crowds moved to DJ-controlled dance floors. Remember the club where Dinosauer BBQ is now? Here’s the article that appeared when Scorgies reopened: 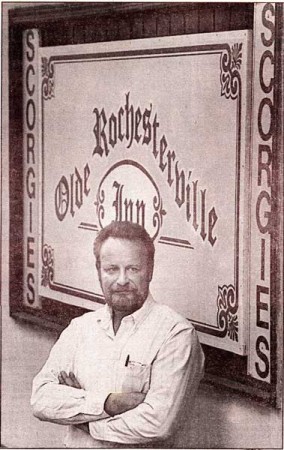 Don Scorgie says he's returning to live music because "I just enjoy it."

Anyone who cared about live rock’n’roll in the early ’80s cared about Scorgie’s, Rochester’s hippest, most daring venue for new music. Long before most listeners had tuned in to the Bangles, 10,000 Maniacs, the Go-Gos and the Ramones, those bands were storming the stage at Scorgie’s. And even though slam-dancing was only allowed once, the rowdy club at 150 Andrews St. is always remembered fondly as Rochester’s post-punk musical outpost…