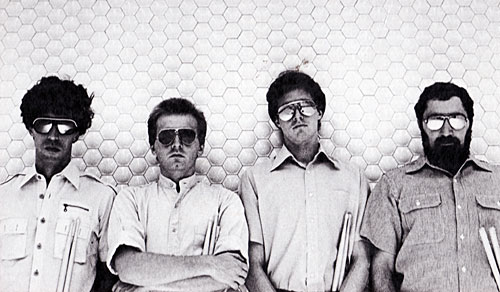 MX-80 rolled into Rochester to play Scorgies on Thursday, October 30, 1980. They had just released their first album on Ralph Records entitled “Out Of The Tunnel” and they were touring the East Coast. Martin Edic, Peggi and I caught MX-80 at Max’s in NYC and some other place uptown before their appearance here. Each show was sensational.

Peggi and I were good friends with Rich Stim, lead singer and sax player (pictured on the left). Rich taught Peggi how to play play sax. The first song she learned under his tutelage was Hava Nagila. And the drummer, Dave Mahoney, was my best friend and roomate for years. Peggi and I were in a band called the Chinaboise with these two in Bloomington, Indiana. Bruce Anderson, second from left, could be the best guitar player in the world and Dale Sophiea is a monster bass player. Peggi and I left Bloomington for Rochester and MX-80 eventually moved to San Francisco.

We opened for them in Rochester and in Buffalo. They made the Hi-Techs sound like a toy band with their powerful anthems, “Follow That Car”, “I Walk Among Them” and especially “Someday You’ll Be King”. We were blown away by their performances. Unlike most of the Scorgies bands, MX-80 is still around. Check out their video of “We’re An American Band“.

Here’s an mp3 of “Someday You’ll Be King”
[audio:http://www.quadrupedmedia.com/downloads/mx80SomedayYoullBeKing.mp3]