September 17, 2008 in Uncategorized, Your Stories by Paul | 8 comments

I grew up in Rochester but left for awhile. When I returned, I put a small ad on the wall of Record Archive which at the time was located in a small area next door to the Village Green on Monroe Avenue. I was looking for someone to play drums with and Gary Trainer and Kevin Patrick found my ad. The earliest version of New Math had Mark Schwartz on keys and Paul Armstrong on guitar. That lasted for a few gigs and the lineup changed. Gary and Kevin were always in charge. 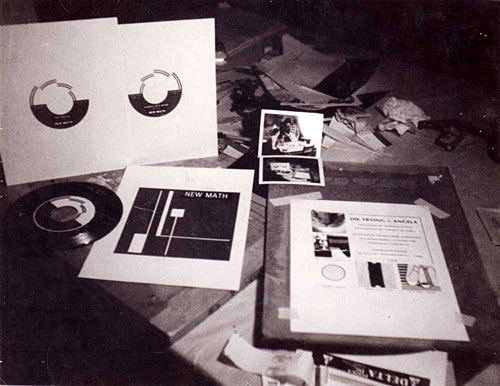 The New Math single, “Die Trying”, got a lot of play on the Scorgie’s juke box. It was released on at least three labels and the photo above shows artwork for the 7 inch vinyl that was never used on any of the releases. If you click on the photo above you can can see a comp with the artwork pasted on a forty five. The double lines that arc over the hole created an optical illusion when it spun on the turntable. Without drugs you could see colors in the black and white label! I think you actually had to spin it faster than 78 to see the colors and maybe that’s why it was never used.

I was working as a graphic artist at Multigraphics (in the same block where KrudCo now is) so the artwork for the single fell into my lap. I think Kevin found the design that we used for the front cover in an old art book and I recreated it. In the photo you can see Robert Slide and someone else in one of the small photos on the desktop. I was thinking that Robert took this photo but it may have been Corrinne.

The back cover of the sleeve went through a few revisions and someone had the idea to have each person in the band contribute a two inch square piece of art. I seem to remember Dale never getting around to submitting his piece so Gary suggested that I put a zero in there. I could have that all wrong. Maybe someone else remembers.

The first release was on Reliable Records in England. Howard Thompson produced this single with Dwight Glodell engineering at PCI studios, across the street from East High. Howard went under the name “Howard le Canard” for the deed and he was instrumental in getting it released on this London label.

I had already decided to quit New Math before going into the studio but I waited until the recording was made before announcing my intentions. The same night we recorded these songs Peggi was at Max’s Kansas City for the Cramps and I really wanted to be there. Bryan Gregory was still in the band and we were crazy about them. All we had were two purple and green Vengeance singles (both produced by Alex Chilton) that we had picked up at the House of Guitars. The HOG kept the import and underground US singles in a locked cabinet upstairs in the hallway and you had to get Greg from the Chesterfield Kings to unlock it if you wanted to paw through the offerings. I remember picking up three early Pere Ubu singles and an early Devo version of Mongoloid and all sorts of great stuff .

I met Kevin for lunch and a Heineken at the old Manhattan restaurant near Midtown and told him I was jumping ship. I had a great time in this band but I wanted to do something different – like make music with my wife (you know what I mean). Peggi sings, plays sax and keys and we formed the Hi-Techs not long afterward but that is another story.

Die Trying was re-released on CBS in England with the same b side, “Angela”, and eventually Dick Storms released it in the US on Archive Records. This last sleeve was designed by Duane Sherwood and it had a different b side, a Dale Mincey song called “(I) Can’t Get Off The Ground”. New Math did a gig with Human Switchboard and Dale eventually married their keyboard player, Myrna. 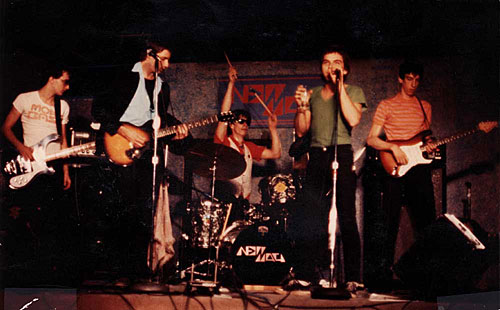 A few weeks ago I was talking to Gary Trainer at the Village Gate Courtyard between Margaret Explosion sets and he was saying how lucky we were to have a place like Scorgies. We were trying to recall some of the places we played before Scorgies opened. The rock clubs mostly had commercial hard rock bands at the time and you needed a manager or booking agent to get you into the clubs. We worked with Jim Armstrong and even gave him credit on the single. He had some rock solid advice that stuck with me like “don’t let the crowd hear you tuning up (or playing anything for that matter) before you hit the stage because it spoils the performance”. NRBQ did this better than anyone by running on stage and starting as soon as they touched their instruments. Howie from Six String sales booked some club along the river and we did business with him too. Pelican booked bands at the time and Penny Arcade would book an original band but then have the bartenders wear t-shirts that said, “Punk Rock Sucks” or some such nonsense. Like they would know. They were in cahoots with the ultra conservative, formerly “underground” WCMF at the time and they did everything they could to hold back change eventually giving in to playing such “adventurous” new music as the Cars or the Pretenders. 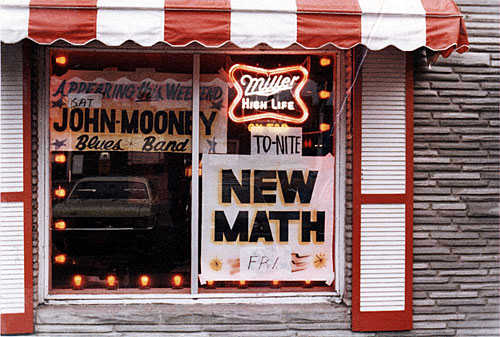 New Math at the Electric Circus on Dewey Avenue in Rochester, NY

We played the Orange Monkey out in Henrietta and the Electric Circus on Dewey and Big Daddy’s on Lyell and some place that Howie booked along the river. Scorgies was better than all these places by a mile. They had their own sound system and lights. All you need are these two things, an empty room and a bar and you have the perfect rock and roll club. I played with New Math for a year and a half and but had already left the band before they played Scorgies. The Hi-Tech and Personal Effects played there many times with New Math and we are all still friends today.

New Math got along fine without me. Bobby “Bam Bam” McCarthy played drums for a while and then Roy Stein joined. They released many more records and eventually changed their name to Jet Black Berries. When I saw Gary, he had a bunch of old New Math posters that he was giving Tom Kohn to scan for the Scorgies site. They should be up here soon.