Jim Malley (of Mercury Posters) is putting together a band flier show at the Record Archive, opening September 4th. While going though my archives, I found this New Math handout; it dates back to the release party for New Math’s “They Walk Among You” on March 12th, 1982.

I guess if the reunion had actually happened I would have had to cut the coupon out of the bottom half. If I had actually put this in my wallet, it would have disintegrated! 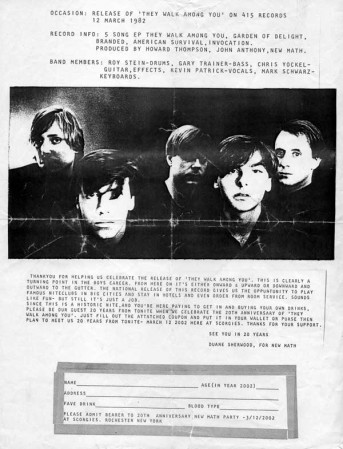 And Duane, you’ll have to confirm this bit of trivia… wasn’t the video for “They Walk Among You” shot on the Pittsford Sutherland High School stage using the set from “Bye Bye Birdie?”