RIP Bobby B of the Resistors 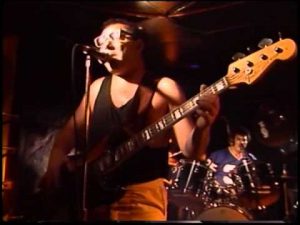 Always controversial, the Resistors were a band unto themselves. With songs like “Bend Over, I Think I Know You” the Resistors certainly let you know where they were coming from. And now, it is time to say goodbye to their erstwhile bass player, Robert “Bobby” Berretone. If you hadn’t see Bobby out much since the band broke up in the early 90’s, that might be because he was confined to a wheelchair. I would often find him at soccer games, cheering his children on the playing field. Here’s the obituary, from the D&C:

East Rochester: October 16, 2017. Survived by his children, Elisa and Abby, and nephews Michael, Collin, Devon, his niece Lily, several cousins, his longtime friend Craig Stewart and his very best friend, Sandy Stewart. A father, an uncle, a college professor, a businessman, a coach and a musician.

Graduated from East Rochester High School and the University of Rochester and then went on and did his graduate work at The William E. Simon Graduate School of Management, at the University of Rochester. In 1972 he founded Scarber Mailers with Michael Scarpino. In 1977 the firm evolved into Icon Direct, at which time it employed more than forty people. He operated the firm until 2002. He developed marketing campaigns for Xerox, Chase, City Bank, Kodak, the U of R and many other firms. He coached CYO basketball for ten years and played in a rock band form 1980-1990. He then recorded two successful CD’s. But his greatest accomplishment and joy was his two daughters-the light of his life.

He loved to see you smile….he wanted to make you laugh. Friends and family are invited to a mass at St. Jerome’s Church, 207 Garfield St, East Rochester on Saturday, October 21st at 9:30AM. In lieu of flowers, donations can be made to support research at the National Multiple Sclerosis Society (nationalmssociety.org)