August 14, 2008 in Uncategorized, Your Stories by MartinEdic | 12 comments

I was working in Record Theater in Midtown Plaza in ’78 and somehow found myself at a New Math show- at the Record Archive I think. There were only a few of us and it felt amazing to see a local original music scene starting. I met Paul Dodd and his wife Peggi Fournier at those early events (Paul was New Math’s drummer) and started jamming with Peggi, a guitar player named Sue and a singer named Michelle. Paul’s brother Tim played drums. Years later I was in band with Tim and Brian Horton called Blue Hand (another Scorgie’s story).

None of us really knew how to play- I think I might have had a guitar at that point and I still can’t play guitar. We shared New Math’s practice space in the Cox Building and really just made a bunch of noise. Sue and Michelle and Tim later got together a great band whose name escapes my ancient brain (commenters please…).

I digress. Paul and Peggi and I became friends and Paul was interested in doing something different than New Math. We were at a party on Park Ave and there was a guy I knew from Irondequoit High School there, Ned Hoskin. Ned had always been a pretty straight guy so I was a little surprised to see him wearing a Never Mind The Bollocks button, an unusual sight in Rochester those days. Turned out he was playing guitar and writing. 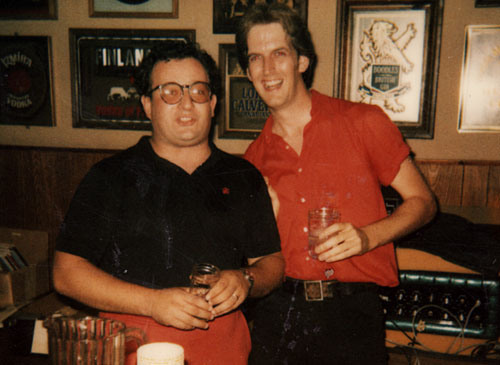 Long story short, the four of us started the Hi-Techs, an intentionally poppy name that I think I get credit for. We needed a bass player so I traded my Fender Jaguar for a bass. Then the obsession began.

We practiced every night, seven days a week at P&P’s, drinking huge amounts of coffee and learning how to write, how to arrange, how to play. Before we ever played out we recorded a song called Pompeii for a compilation LP called From The City That Brought You Absolutely Nothing that Marty Duda produced. The song was a great one but we sounded oh so teeny. Duane Sherwood, who later did lighting and videos for PE, played a synth riff.

After a few months we had a set and opened for New Math at Scorgies. Even though we still had that tiny sound the music was catchy and different and it went over pretty well. By the end of the first year we had a 45, about a hundred originals (some only got placed once or twice), a following and the sound was a lot bigger. It was probably our obsession with listening to records like AC/DC’s Back In Black and ABBA’s Greatest Hits and trying to figure out how they produced those huge sounds (I’m not kidding, we really liked both records). That obsession with production was a factor in in our eventual evolution into Personal Effects.

The Hi-Techs were a really fun band with goofy dance pop stuff and darker, more intense things like Screamin’ You Head, released as the first PE record but actually a Hi-Techs session. I can legitimately say that playing in that band changed my life for the better in a lot of ways.