Luther And The BBB's – Volume One – Review

I still can remember standing in The Mason Jar (a local bar known for serving beer in canning jars)…as well as Scorgies…listening to Luther and The BBB’s. What we heard was a mixture of 1960’s Retro-Rock combined with early 1980’s Power-Pop. The BBB’s were stand-outs among Rochester bands like The Bowery Boys (w/Geoff Wilson), The Insiders (w/Walt O’Brien), and The Chesterfield Kings (w/Greg Prevost). Of these die-hard followers of The Kinks, The Monkees, The Byrds, and The Who; Luther and The BBB’s stood out like a set of new Goodyear Tires instead of some cheapo retreads. The snappy Pop tunes created were on par with Syracuse, NY’s Flashcubes (w/Gary Frenay) or with any other Power Pop band that was on Bomp! or Voxx Records in the early 1980’s. Luther and his boys have progressed to that arena (musically, at times) that includes Cheap Trick, Tom Petty, or early Squeeze.
As time goes around, BBB members have followed different routes…Doug Cox, who briefly formed NYC’s Tonebenders, is now climbing telephone poles; Mike Abrams, now a family man, played a roll in both The Projectiles and The Infants; Judd Williams (known as a “legend” in Boston) plays with The Lyres, Riviera Playboys, and now tours with The Amazing Royal Crowns; and finally Jeff “Luther” Holtzman carried The BBB’s flagship through the ’80’s and ’90’s. (The BBB’s briefly changed to The 3-B’s as well). Many future members included ex-Insiders Walt O’Brien and Bob Janneck; It’s My Party/Housecats/Shakin’ Bones members Ken Peters and Hank “Blast” Karuth. In the lean years, Luther worked as a D-J for local bars and co-wrote songs that ended-up as releases from myself and/or McFadden’s Parachute.

Aside from my usual “namedroppings”, a good listen to the CD (Volume One) speaks for itself. Utilizing rare vintage instruments; Luther has created an array of cool, original Rock’n’Roll as well as some updated cover songs in the bonus set. Check out the Rockabilly-influenced “The Echo”, the yearly Christmas standard “Are You Ready For Christmas”, the Psychedelic “Knee Wash”, and aggressive Power-Pop songs like “Rest Of Your Love” and “In My Mind” – all guaranteed to become repeat listeners. (On Whole Lotta Shakin’ – we usually played his “Credit Card Christmas” which isn’t on the CD).

Despite the choking cigarette smoke, and overwhelming odor of urinals (at The Mason Jar – not Scorgies!); that time was a worthy Rock’n’Roll memory and the music is still vital today. I can’t wait ’til Volume Two comes along without the ‘smells’ attached to the memories!! Hail to the Great Rickenbacker!!

(Note: Since this article was written, Luther has retired from performing but has recorded about four other unreleased volumes of music with and without Dave Anderson from Saxon Recording. His former band mates now play as Shakin’ Bones). – Del.

Preserving Memories…For What It's Worth!

Like most people, I have a scattering of old newspapers, cassettes, videos, and records cluttering up my closet space. When I have the time, I try to convert cassettes and videos to CD’s, DVD’s, or stick it in a file on my computer (for YouTube or some other proper place down the line). Old mags and news clips get into bags like comic books or binders. All this takes a bit of time and expense, which I currently do not have. I only hope that when I kick it, that the cool stuff doesn’t end up in the trash. I already lost cassettes and videos due to deterioration; even some early Sony CD’s with labels won’t play anymore. A friend of mine has a cassette of John Cale playing at Scorgies. I’m hoping that he will preserve stuff like that. I have some video of Rick Baker & The Commercials now on DVD that I’m dying to upload. Many friends have bootleg cassettes of The Insiders that are impeccable. My suggestion is to preserve these things, only if you have the time or if the stuff is worth it in your heart. The best way, for now, is to get it on the internet so other fans can check it out. I thank Stan The Man, Tom Kohn, and others for getting this web site out. It may be a good starting place for your posters, stories, and a few website links to bands that are still at it! It doesn’t hurt to use a professional studio, if you have some bucks to convert and properly preserve stuff as well (not quite like the Eastman House working on 1920’s films, but to make stuff watchable and/or audible!).

I thought I’d make a quick mention for now about the period when Scorgies became Yuk-Yuks, then Hiccups. It was a time when stand-up comedy was red-hot on a national basis…and for then, Scorgies bands were on the wane. I had mixed feelings about the switch-over from a cool club (after The Ramones were the last major band to play there) to a painted-black and chilly downstairs place for a few years. I used to supply music cassette tapes for the d-j, and interviewed comedians from Saturday Night Live that used to swing by there (like Rich Hall, David Spade, and Colin Quinn).  Many local comedians became nationally known like Brother Wease, Joel Lindley, Eric Nusbaum, Dan Liberto, Ralph Tetta, Mike D’Ambra, Spilt Milk (with Eric Haessler, Mark Cooper, and Duncan Kennedy). Some of us stand-up comics (local guys) were also given the chance to write ideas for the then-popular Joan Rivers Show (prior to becoming The Arsenio Hall Show). Some of the comedians performed later when the place was Token Joe’s upstairs. I’m sure that I can write a lot more about those times…but that’ll fill yet another web site. Of course, stand-up comedy also waned and a newer Scorgies (albeit temporary) did come back again! – Del Rivers

What Happened To The Insiders…

THE LEGACY AND LEGEND OF THE INSIDERS 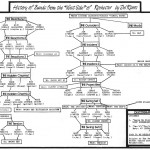 West Side Family Tree Circa 1984

I was pretty psyched when I first saw The Insiders at Scorgies. They, and few other bands, were anomalies sandwiched between the “New Wave” and “Punk” bands. Seeing them play live was like watching  the Beatles playing in a Rochester version of England’s Cavern Club (the Chesterfield Kings were like the Stones and the Projectiles were like the Animals)!

Every person sang in the group, although Walt O’Brien was considered the group leader (and had the best voice, to this day). I wrote about them and created a Pete Frame-like family tree in Notebook Magazine (run by Absolute Grey’s Pat Thomas). Though costly, I created a few fan club magazine issues of The Insiders that I’d pass out for free at Scorgies and other places.

Shaunn Day (who now works with Jim Havalack at Quality Transportation) started the Insiders fan club during their high school days in the late 1970’s. I continued the fan club until my I started first web site (sadly, I lost all of my copies of the Insiders fanzine in a house flood). There were several line-ups of The Insiders incorporating members of Luther & The BBB’s (who also played at Scorgies), The Infants, Projectiles, Cousin Al and the Relatives (“Cousin” Brian Goodman) and other like-minded musicians  that had an affinity for 1960’s British-invasion era music.

END_OF_DOCUMENT_TOKEN_TO_BE_REPLACED

November 11, 2008 in My Favorite Shows, Uncategorized by Del Rivers | 1 comment

One of the Scorgies artifacts I came across recently was a cassette of The Royals – Live At Scorgies which was actually recorded live but with applause dubbed in! It was intended for booking the band into other bars, but with the credence of having played at Scorgies. I think my friend Jon Pirincci (of Musical Messages Agency) dubbed the tapes. I actually met the guys from the Royals literally by accident at a tent festival show that featured Roy Orbison (prior to The Traveling Wilburys). We had to wait a long time for Roy because he was “warming up his voice.” Years later I found out about his secret cocaine habit;  perhaps that could have been the reason for the long wait.

I’m not sure if I first met George “Michael” Schnell and Mick Hargreaves of the Royals at a Red Wings game or an N.R.B.Q. concert (either before or after). Regardless, we became fast friends with common musical tastes. They used to have a partyin’ apartment right across from Wegmans near East Avenue that was always filled with pot smoke, music, and bed sheets hanging over the attic ceiling (like a harem den!). They were transplants from NYC and had common friendship with the Tension guys;  guitarist Mike Pappert (from Fairport) and Swing Set drummer Dave Martin (Liebowitz), who I believe was also from NYC.

George Schnell was a meticulous guitar player who eventually opened the Studio At The Village Gate recording studio. He’s known for recording bluesman Chris Beard and was briefly a Country Music DJ; and still spins  at Jeremiah’s Tavern on Monroe Avenue. Mick Hargreaves used to videotape bands for local cable TV then moved to NYC with The Diljoys and formed the Tonebenders with guitarist Doug “Davies” Cox. He later became a member of the Grip Weeds and is presently a solo artist.  By the way, one former  Royals member, drummer Joe Minotti, is currently in  Joe Hendrick & The Mudflaps.

George told me that he envisioned the Royals as a cross between 10 CC and Dave Edmunds. Eventually, as all bands seem to do, the Royals came to an end (much like Dave Edmunds and Nick Lowe’s band Rockpile). George Schnell continued on with variations of the Royals; but by then it was pretty much a party house band providing studio support for his original songs.

The. tape Live at Scorgies had covers of Dave Edmunds’ Dear Dad, Nick Lowe’s I Knew The Bride, the Beatles One After 909 & Honey Don’t and Elvis Presley’s Little Sister. The originals were Get Me Out Of The Red and Let’s Jag. Get Me Out Of The Red was played extensively on local radio stations. The Royals came close to releasing a 45 single (or album) of Are You A Dancer?” b/w I’m Falling that was produced by Jeff Tyzik (yes, it’s the same big band RPO leader!). Upon listening it’s apparent that the Royals, like many other bands, could have been on the cusp of having a hit record. And like the other Scorgie’s bands – maybe they could reunite eventually for a night or two – this time for real!

I guess it all started around the late 1970’s. In high school, I kinda got off on pissing-off the Hilton farm boys  that teased me about music. All you would hear is Lynyrd Skynyrd, Genesis, and Stanley Clarke jazz. I was going to train to be a DJ, but sadly our equipment was busted and there were only a few Beatles records worth playing. I never became a DJ at school, but had a reputation for liking alternative stuff and hung out with similar people. I kept buying cool albums, 45s, and 8-tracks that were rebellious or non-popular items. I scoured every budget bin. I was a DJ in my short college days, mostly at parties and a couple bars later on. I hadn’t quite appreciated hard Punk Rock like the Sex Pistols or stuff like Iggy Pop or Johnny Thunders until I met Luke Warm – the most infamous DJ at Scorgies. He often mocked my occasional Fleetwood Mac, Boston or Foreigner T-shirts left over from that time period. My neighbor, Mike Murray (from WITR’s “Whole Lotta Shakin”) grew up near me and is probably responsible for getting me into music and comedy (Ramones & Elvis Costello after school, Saturday Night LIve & SCTV late at night). We would try to outdo each others collection and knowledge of trivia. After seeing New Math open for the Ramones at the Auditorium Theatre, we were hooked on going to Scorgies every week.